Are you REAL ID ready?

Beginning May 3, 2023, Louisiana residents will need to present a REAL ID compliant license/ID, or another acceptable form of identification, for accessing federal facilities, entering nuclear power plants, and boarding commercial aircrafts. The card, itself, must be REAL ID compliant unless the resident is using an alternative acceptable document such as a passport or passport card, or state-issued Enhanced Driver’s License. The REAL ID Act does not require individuals to present identification where it is not currently required to access a federal facility nor does it prohibit an agency from accepting other forms of identity documents (such as a U.S. passport or passport card).

Secure driver's licenses and identification documents are a vital component of our national security framework. The REAL ID Act, passed by Congress in 2005, enacted the 9/11 Commission’s recommendation that the Federal Government “set standards for the issuance of sources of identification, such as driver's licenses.” The Act established minimum security standards for license issuance and production and prohibits Federal agencies from accepting for certain purposes driver’s licenses and identification cards from states not meeting the Act’s minimum standards. The purposes covered by the Act are: accessing Federal facilities, entering nuclear power plants, and boarding federally regulated commercial aircraft.

Documents to Establish Identity, Date of Birth, and Lawful Status

A United States citizen shall provide at least one of the following to establish the applicant's identity and lawful status:

Present two (2) original documents which include the applicant’s name and Louisiana street address. The documents must be from separate/independent sources.

All applicants for initial issuance of a REAL ID driver's license or identification card must provide proof of the following: 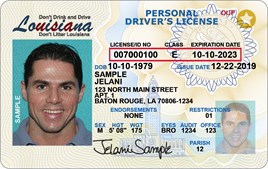